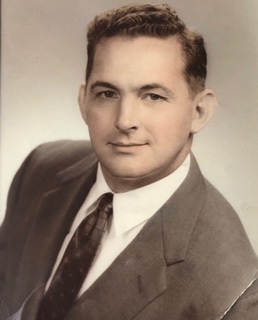 Mr. Aubrey Leon Whitfield, 96, of Winnsboro passed away on Friday, December 27, 2019. Born in Dunwoody, GA, and raised in Austell, GA, he was the son of the late Edgar and Annie Swain Whitfield.

Aubrey lived through the Great Depression and served in the U.S. Army Air Corps during WWII.  After the war, he enrolled at the University of Georgia on the GI Bill where he earned a BS degree in Forestry.  He began his career in forestry with International Paper Company in Georgetown, SC and worked in several towns in North and South Carolina, with the majority of that time being in Winnsboro.  After nearly 40 years with International Paper, he retired in Winnsboro as senior forester in the land and timber division where he managed thousands of acres in 18 SC counties and 9 NC counties.  After retirement, he worked for David Brown Realty and devoted much of his time to his church, Sion Presbyterian, which he dearly loved.  He served as deacon, elder, Sunday school teacher, and chairman of the cemetery committee.  He was a church camp counselor and Scout leader and followed the successes of the young people he mentored throughout life.  He was a Master Gardener and known for his ability to identify nearly any plant or tree species.  He valued hard, physical work and instilled that value in those around him.   He enjoyed following the Georgia Bulldogs and watching football with his family.  Most importantly, he loved his Lord and Savior, Jesus Christ, and cherished his family.

Memorial services will be held at 1 o’clock PM Tuesday, December 31, 2019 at Sion Presbyterian Church conducted by Reverend Rebekah Carpenter and Reverend Dr. Dwight Pearson.  The family will receive friends after the memorial in the church fellowship hall. Inurnment will be held at 2 o'clock PM Saturday, January 4, 2020 in the Historic Quaker Cemetery, 713 Meeting Street, Camden, SC 29020.

In lieu of flowers, memorials may be sent to Sion Presbyterian Church

To send flowers to the family or plant a tree in memory of Aubrey Leon Whitfield, please visit our floral store.